Im so glad I havent written my blog yet, as I have just received from Linda Reinstein of ADAO ,

http://vimeo.com/50683832  Trailer for the ABC TV mini-series, a political thriller of David and Goliath proportions about Bernie Banton’s struggle against asbestos multi-national James Hardie Industries. Watch the trailer and notice when a wife shakes her husbands cloths just as she washes them —I recognise that as that was what I did ????

This is the story of  Bernie Banton http://en.wikipedia.org/wiki/Bernie_Banton and has been made from the book  “Killer Company”

IT’S a real-to-reel transformation that will haunt the supporters of asbestos warrior Bernie Banton. 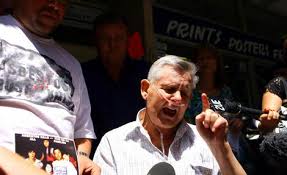 While the man who brought James Hardie to justice for exposing workers to mesothelioma lost his life to the disease in 2007, he has been reborn on the small screen.

Anthony Hayes, of The Slap, bears a close resemblance to Mr Banton in a new ABC mini-series,Devil’s Dust which began filming in Sydney this week. Mr Banton’s equally-determined wife Karen, who has given the two-part telemovie her blessing, is played by Fred Schepisi’s daughter Alexandra.

Ewen Leslie will star as ABC journalist Matt Peacock, who discovered the cancer link and wrote the book Killer Company,from which the series is based.

“I’m thrilled Bernie’s story is being told because asbestos illness is an issue that’s probably never going to be over,” Mrs Banton said.

I had a lazy day as we were shattered from yesterday but  feel back to normal tonight.

come with me on Louis walk in the lovely sunshine.

Up by the side of the church in a quiet estate

One tree in a garden

Louis had to have his taken of coarse

He was a great boy today as the dog that always barks at him as he passes and Louis barks at through the window as the dog passes and sets Louis of barking– got loose out of the house today just as Ray was coming up the road with Louis. OMG I thought there would be a fight but no Louis was so good and allowed him to fly past-he wanted to run with him but Ray said NO! and that was it Louis just watched as the dog ran to his master.

Looking down Faversham road as we turn to go back home

haha !!!Ray has taken me as I go and put my doggie bag in the bin like a good dog owner does

The local Church where they prayed for April today bless her

So thats was my walk today we took so many photos as the camera was playing up yesterday but outside it seems to be working well.