I slept in till 8am -that was great but it means by the time you get up and have breakfast then shower the morning is nearly gone.

The weekend must have been wearing us out ha ha !!

I did have fun but enough to make me sleep 9 hours is unheard of.

I did the housework so Ray could get on painting the windowsill.

washing caught up with and out on the line –I felt good. Today has been a good day.

Off we went to Tankerton slopes and gave Louis a good long walk. We sa the Windfarm as it was fully in the sunlight.

We could hear a ships horn going really loud but we couldn’t see a boat that was responsible.

We walked round to Tankerton High street and then back onto the seafront and there was the Waverley Kingswear Castle coming out of Whitstable Harbour.

She is such  a sweet boat.The last paddle steamer on her way to Hernebay.

The PS Kingswear Castle is a steamship. She is a coal-fired river paddle steamer, dating from 1924 with engines from 1904. She now runs summer excursions on the River Medway and the Thames. Kingswear Castle is listed on the National Historic Fleet, Core Collection of ships of “Pre-eminent National Significance”. 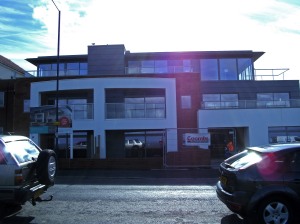 The last Apartment is to be sold in my Favorite building site which over looks my special Tankerton slopes –wouldn’t Louis be happy here running out of here each morning and chasing the seagulls.

Then straight down onto the beach for a swim. The only thing is the winter north wind blows in so cold and lashes the rain down hmmm maybe it wouldn’t be a good idea.

We are now tucked up in the warm all snuggly and happy.

I received a great email from cancer research

David Cameron announced a new ‘radiotherapy innovation fund’ this week. He’s making £15million available to the NHS in England so that by April 2013, more cancer patients can benefit from advanced radiotherapy like intensity-modulated radiotherapy(IMRT).

The money has become available because the Government’s Cancer Drugs Fund – set up to make new cancer drugs available to patients who need them – is under budget.

This is fantastic news, for several reasons.

Thats great news but us warriors must now make sure it comes to Mesothelioma.