Can this be achieved in the asbestos removal industry

Its been a quiet day as I have felt so tired and yet I was awake at 3.30am very thirsty and dieing for the Loo.So got up and had a coffee but I was wide awake  I feel just like when I was on steroids when i was on Chemo.

Im writing everything down in my Diary to show the Trial Team.

Lots of chest pain but that was happening anyway and with the bottom of my Lung very restricted that is to be expected now.

I had a lovely Face book message from the lady I said was on the trial. Her daughter has contacted me so Im really pleased to be able to compare.

She isnt on a computer so I honour her wish for privacy. But when we get through al this and we have something to celebrate I will try and meet her. She is on the Friday’s  list. They offered me Friday but it would have messed up my camping days, so I chose Monday.

We went shopping and I bought nice tasting foods so that I keep my appetite up. Im loosing weight so I dont mind a bit but it mustn’t just drop off- bad sign.

I also treated myself to another jumper for the going away this week.

We have had to check Louis paperwork and so he is all ready for the kennels. Bless !!

I did do some weeding and I will finish a little more gardening tomorrow.

So  we are living normal life now.

After my Blog yesterday I have had a comment –

Hi. I like your friend Ray worked in Devonport and also on board the Eagle, which was a big ship with lagging everywhere. I was a fitter and every chance when lagging was being removed I tried to keep clear. I have heard stories that even some office girls ended up in the same trouble.

Another point is that the dangers of asbestos were known about in 1948 but the powers to be did not act, or provide the protection needed.

I googled Devonport and came up with this great report.———————- 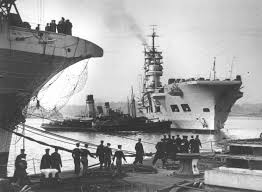 In the five years from 2008 to 2012, a total of 396 deaths linked to asbestos exposure were recorded in Devon and Cornwall.

Unsurprisingly, given the prevalence of asbestos in Devonport Dockyard, 120 of those were in Plymouth. A quarter were from incurable mesothelioma.

That figure would most likely be far higher but for the work of former dockyard union leaders Bill Goffin, John Williams and Dick Powell.

In turn, as senior dockyard AUEW/AEEU conveners, they would be the thorn in the side of managers, insisting that new safety regimes were introduced – and adhered to – despite the consequences.

The dangers of asbestos, which began to be used commercially in the mid 1800s, had been recognised as far back as 1898. By 1970, regulations came into force which set out limits for asbestos dust exposure.

But for Bill, there were no safe limits, and he set about adopting a “zero tolerance” to the material in 1973 – a full ten years before legislation was strengthened.

“I got all the shop stewards together, showed them the information and said ‘this has got to stop’,” he said.

“There was no protection whatsoever, in those days – none. We worked in the same conditions as people had in years gone by.

“We later realised that lads who were taking a stand were being crucified, being taken off overtime, and were being threatened with being moved. Eventually we decided to embark on a policy of ‘scratch one and we all bleed’. To a man it was well supported, no-one argued.

“We adopted a zero policy regarding asbestos and other dusty materials. We wanted a regime of cleanliness and inspection. It wasn’t easy – people were losing money, but eventually the management were forced to negotiate with us.”

What resulted was an inspection process which had to be signed off by both management and union reps before work started, although mistrust still remained.

Throughout the 1980s, national regulations on working with asbestos were tightened. It was eventually banned outright in 1999. For hundreds, though, the new health and safety regime came too late – they had already been exposed. They now face the possibility that those asbestos fibres will claim their lives.

Bill, John and Dick all worked, unguarded, with asbestos during their time in the yard. Dick, 70, now has pleural thickening – scarring on his lungs from inhaling asbestos. He recalled: “You would have someone working below you and there would be loose asbestos floating down on them like feathers, landing on his head. Now you look back and think you were really poisoning them.”

Bill added: “Lots of materials were not identified as containing asbestos. They were known by acronyms or trade names and people were working on it quite ignorant of that fact that it contained asbestos.”

John said: “I worked in offices where women were working, in those days on their typewriters, and we were ripping out asbestos alongside them not knowing what it was. If we had, we wouldn’t have touched it. They were walking around in it all and breathing it in and yet they were exposed to asbestos, having never been aboard a ship.”

While the men’s frontline union duties have long since passed, their asbestos fight goes on. Attending funerals of asbestos victims is a regular occurrence. Dick has been to two in the last month. All still receive phone calls from former dockyard workers who have now developed asbestos-related diseases and advise them on the legal and compensation process.

The random nature of asbestos-linked diseases, affecting some early, some very late, in life while leaving others unscathed, is a difficult question. “You could be working with someone for years and then suddenly he gets it and in the worse cases gets mesothelioma and you are left thinking why haven’t I got it?” said John, now 73. “There are wives who have contracted mesothelioma – but not my wife. There is no-one that can explain why.”

“That was one of our problems in fighting against it,” Dick added, “because some of us got it and someone of us didn’t.”

Bill said: “All the time people who you had worked closely with were becoming victims of asbestosis, they were coming through with pleural plaques and being diagnosed with mesothelioma and we had to pick up the pieces of that. Lads would come into the office with one word – mesothelioma – written on a piece of paper. We had to find the words to tell them it was a death sentence.

“We were seeing claims through the legal process and meeting with all kinds of awful tactics. The stalling tactics that went on, while people were seriously ill, over the matter of a few quid, I thought was disgraceful.

“All this impacts on you, it marks you and makes you even more determined.”

None of the dockyard’s “Holy Trinity”, as Dick jokingly refers to them, would take credit for saving lives, although John is quick to say: “Bill has probably saved hundreds of people in this city who worked in the dockyard from developing problems from exposure to asbestos.”

In turn, perhaps predictably as a union man, Bill is quick to deflect such individual praise.

“It is one thing that I will never regret,” he says. “The lads I represented, who lost pay and in some cases were vilified, stood their ground.

“I believe they have saved many, many lives because of the protection we insisted on.”