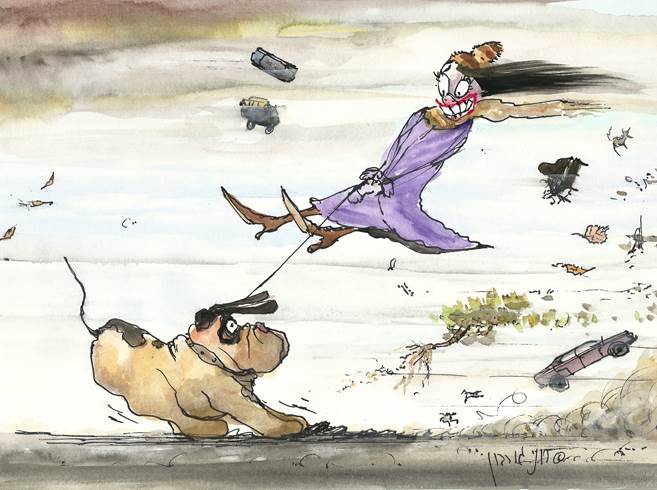 Its been a very stormy night with very high winds and rain lashing down.

they have named this storm Angus.

The Met Office said gusts of 84mph were recorded at Guernsey Airport, with 53mm of rain being logged in Exeter, Devon, including 10mm in one hour.Forecasters have warned of possible power cuts, damaged buildings and travel disruption.

Among the areas already known to be affected by flash flooding are Plympton, near Plymouth and the M5 near Birmingham.

So many people have had a sleepless night and I woke up early as well and then saw neighbours lights on.

Life has been quiet this week and back to normal so we have decided to decorate the bedroom. I hate having to choose colours as I just can’t make my mind up.

Off to B&Q today to find the right paint to match our ideas.

Over the last 2 days I have been really having a clear out of the bedroom as after 7 years of being so involved in my illness things have piled up and so Im hitting the wardrobes again. Lucky enough we have a clothes bank at Tescos so I was able to take my pile straight away and get rid or I know I will start saying “well I could keep this and keep that” and everything will get hung up again.

Our Fight against Asbestos in Schools has really taken off with reports coming out all over the country and the schools being listed that have asbestos in them.

We don’t really want to cause a panic but just to get the Government to move on this and start a program of removing it to make the Schools safer for young lungs. It’s not an old mans disease as we have patients from 18 upwards.

So far, 12 Kent County Council employees have a brought cases against the council and has admitted liability on eight of these claims.
A spokesman said In most cases the asbestos in the schools was insulation on parts of buildings that are out of sight and not accessible, such as boiler rooms, pipes, chimneys and roofs. But we know from the Brent Report it is in assessable places and children kick walls and pin drawings we just should not take the risk.
Read more at http://www.kentlive.news/nearly-60-schools-in-dover-and-shepway-have-asbestos/story-29904234-detail/story.html#quKMRhfbxXqSF8ZZ.99

They find the money for Buck House and House of commons they really should sort the schools.

The facts about asbestos in schools
• 86% of UK schools have asbestos in them, putting over 7 million pupils at risk. A survey in 2015 found that 44% of teachers have not been told if their school contains asbestos. This lack of awareness puts them and their pupils at risk of exposure.
• More than 224 school teachers in England have died of mesothelioma between 2003 and 2012. There is a similar pattern for school support and maintenance staff. Last year 22 teachers died, meaning the UK has the highest death rate in the world. Experts predict that the number of school related deaths in the UK will continue to rise.
• Children are particularly vulnerable to developing mesothelioma. A five-year old child that is exposed is five times more likely to contract mesothelioma than someone exposed to asbestos in their 30s. It is reported that between 200 and 300 people die each year from exposure to asbestos as school children.

If you really are shocked by all this then please sign The petition that Lucie Stephens is trying so hard to have more people signing.

Bernie Banton Foundation in Australia is having their first Symposium on Mesothelioma and Asbestos Related Support. It is being held at Parliament House in Sydney, on Monday the 21st November. so I wish Rod Smith and Karen Banton success with this. I wish I could be there but they know I support them from afar.

Karen tells her story in this video. 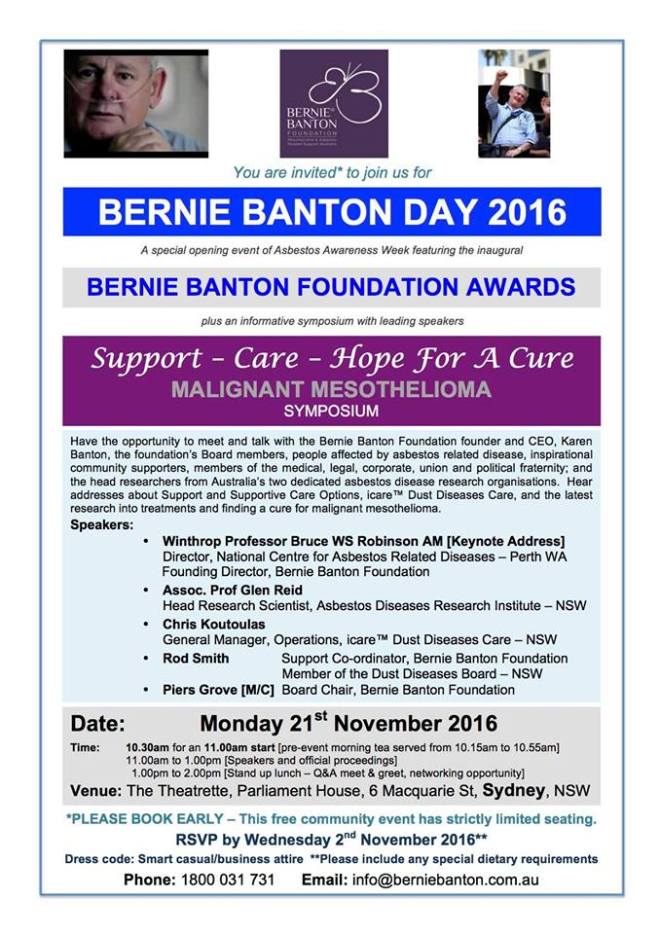